Can we say that after five flat or almost flat stages, held up only by the narrative ability of our correspondents, we finally arrive at the first big climb? Yes, without fear of denial. Up to now, we could get high, up above, only by airplane, flying from the puszta to the Conca d’Oro. Now it’s time for the legs. We climb Etna, the highest active volcano “of the Eurasian plate”, just to put it down like Piero Angela would. And for the first time in the Giro’s history, not from the southern side, from Catania, but from the north, from Linguaglossa where the pines and birches – so unusual for such a southern latitude in Europe – take the place of the fragrant gorse. We climb the Strada Mareneve, the faded slogan of many attempts to enhance the tourist-speculative nature of the Muntagna (ed. mountain in Sicilian), ready to pay back every insidious attempt to tame it with fire and flames. 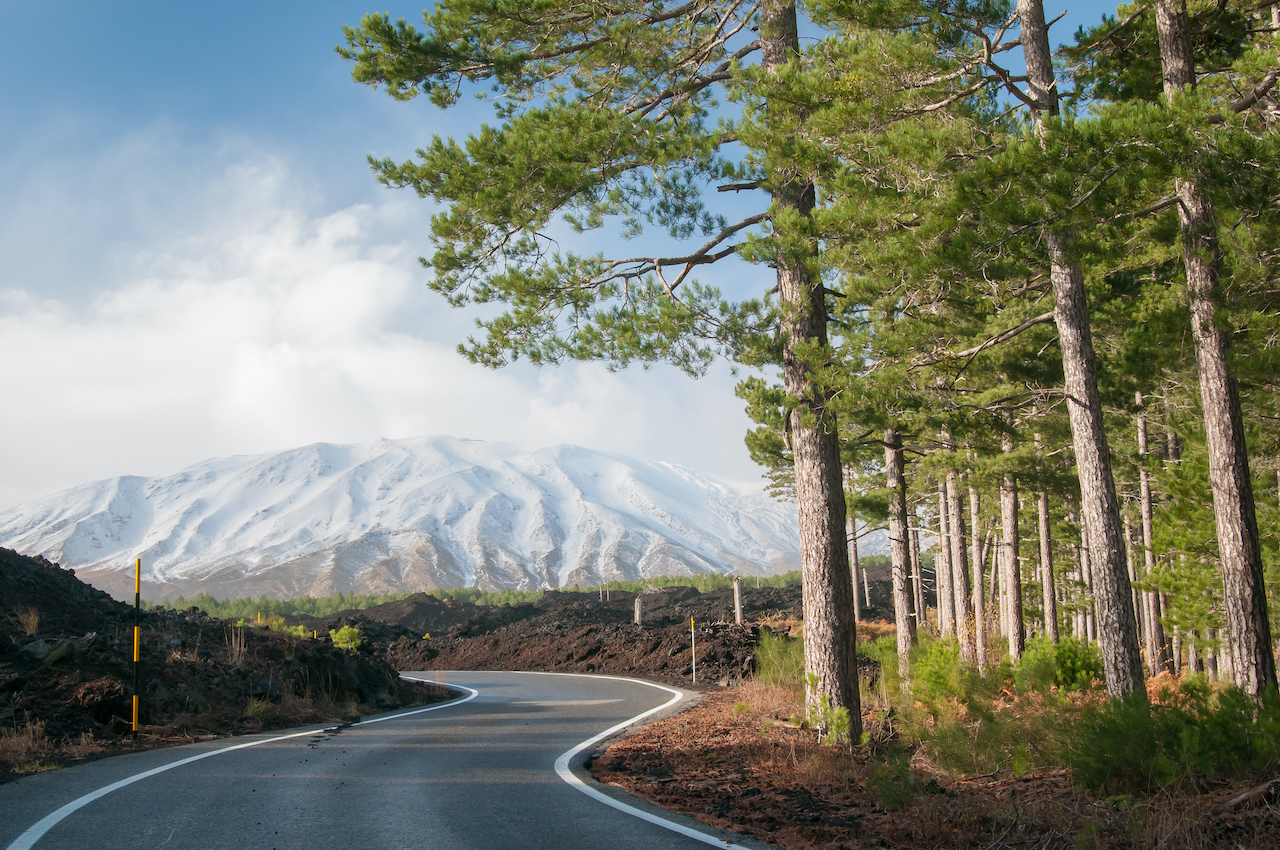 The climb to Etna, which naturalists once would carry out on foot or on the back of a mule with the fear of being trapped in sudden lava flows, today is done by car up to high altitudes. Biking it represents the most daring undertaking that can be found in Sicily in terms of length, height gain and slope. It is no coincidence that the Giro has come back here several times: in 1967 with Bitossi, in 1989 with the Portuguese Da Silva, in 2011 with Alberto Contador, in 2017 with the Slovenian Polanc, in 2018 with Esteban Chaves.

The unprecedented route begins in Linguaglossa, a town spared from a sudden lava flow thanks to the intercession of St. Egidio Abbot. The lava stone slabs of which the roads are paved definitely assign it to the volcano. You start from Piazza Castrogiovanni, pass the Circumetnea railway, and take the Strada Mareneve, as straight as a spindle towards the natural chimney. In the first two kilometers you become familiar with the climb: 4-5% slope, among olive trees and vineyards in abundance. Then the gorses appear: the landscape is dyed in yellow, in contrast with the heaps of blackish lava. The slope comes alive. At the meeting with the Trazzera Quota Mille (km 3.4) we reach 6.5-7%. Wide road, well designed, but without shadow for now. This side of Etna is fresh and breezy. Ascent suitable for all rouleurs-climbers as for about 10 km the slope will remain constant around 7%. The wide hairpin turns help to keep up the pace. One needs low gears: a 34T for 24-26T is all right. After an altitude of one thousand meters, pines and cypresses line up at the edges of the roadway. One climbs into the forest in serpentines: a detour to the left indicates the Zappinazzu, the “largest pine tree of Etna”. At the 14th kilometre the slope decreases to 4%, but it is the prelude to the final ramp that begins after leaving the Strada Mareneve at the crossroads for Piano Provenzana. The last 3 km raise the slope to 9.1% with peaks at 11%: a different story. The mouth of the volcano is close and scary, the forest protects. The lava fields will be seen under the finish line banner, at 1,775 meters above sea level.