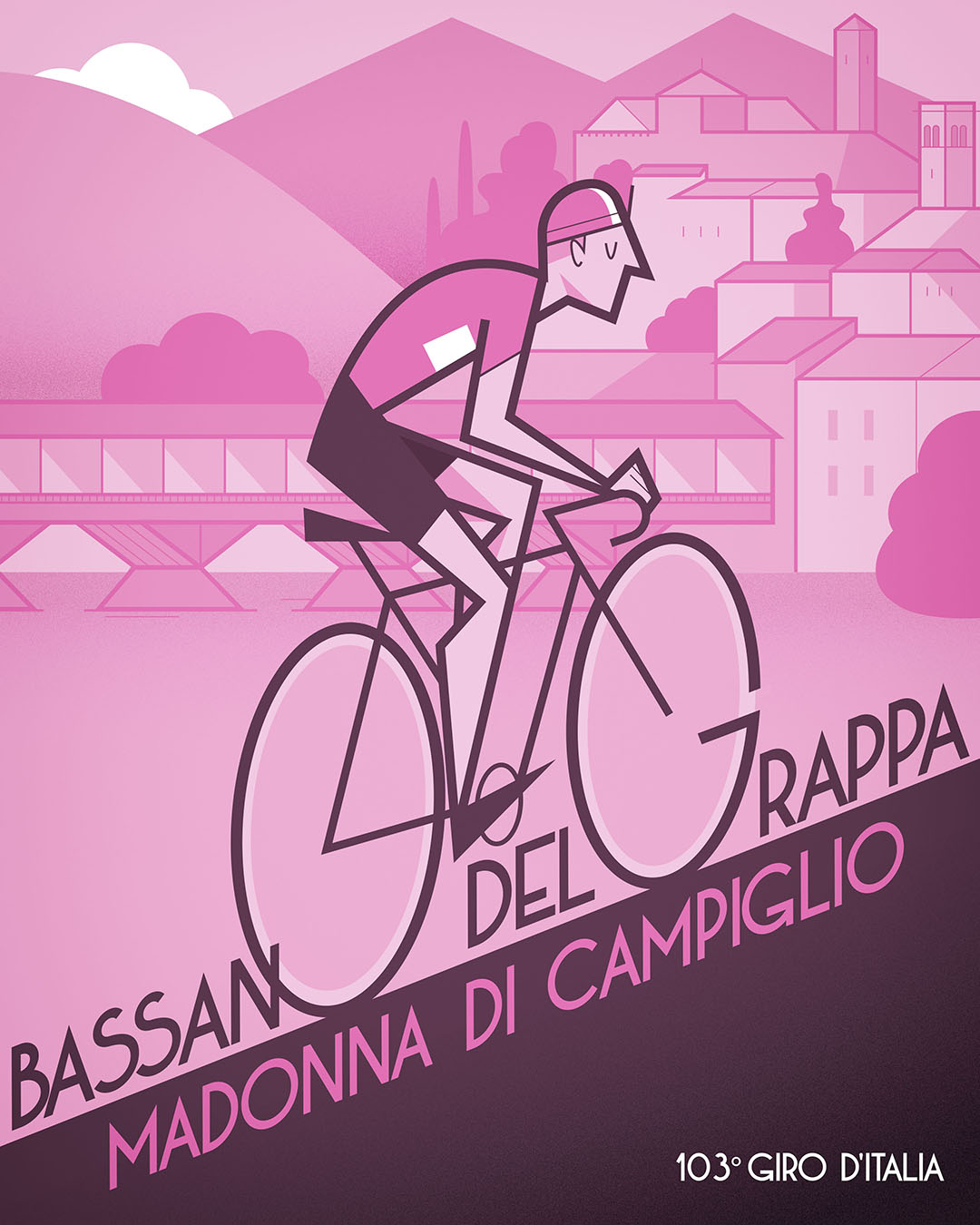 On the ridge of the Giro

Following the San Daniele prosciutto, the Giro starts again from Bassano, the town of the Grappa mountain and the grappa spirits, of the Italian mountain regiment of the Alpini and of the bridge, but also of the 31 partisans who were hanged from the trees of Via dei Martiri; to this day the same trees bring back those indelible images.

After the breakaways, the falls and comebacks of the previous days, today we start climbing: this is the first alpine stage of the triptych labeled 5 stars on the Garibaldi guide. More than 5,000 meters of elevation change with four climbs: Forcella Valbona for the first time, the Monte Bondone, the Durone pass and the final ascent towards Madonna di Campiglio. The arrival of the Giro reminds us of many, maybe too many things: the victory of Gibì Baronchelli in 1977, the competition between Checco and Beppe in 1985, with the victory of Saronni. Then, obviously, him: Pantani.

The  first 40 km wind along the pre-alpine hills, a land of cyclists and bicycles, but also of the ceramics of Nove, of white asparagus, cherries from Marostica, of the alcoholic nectar of Breganze and the porchetta from Zugliano: according to Alida Valli and Luchino Visconti, the tastiest in Italy. But the “eat and drink” vibe ends when you turn towards the mountains and, as soon as they smell the Alps, a group of daring climbers breaks from the rest. Nobody knows if it’s just a spurt, a trip to the countryside kept under control by the peloton, or if it’s something more daring: we’ll see.

The names, however, are there: Dario Cataldo, Giovanni Visconti, Gianluca Brambilla and Fausto Masnada. It’s not a red-white-and-green Italian breakaway, Krists Neilands and Tanel Kangert are also there. They are excellent all-rounders or, as they say here, passisti-scalatori. They are mounting a challenge to the blue jersey, looking for a “simple” stage victory or at least bring their jersey colors out for a ride.

On the first climb towards Forcella Valbona the group lets them go, with the protagonists of the past and those of the present produced by the recent stages. They look at each other repeatedly: will Nibali try to catch up today? Is Dumoulin definitely out of play? And if so, will they try to take a shot at this stage? Are the two 30 year old Bilbao and Betancur ready for the final victory? Everyone looks frantically for the eyes of Gino and Remco: who knows what’s going through the heads and the legs of these two?  Could it be the moment for the seasoned Pozzovivo?  Up on the top, skirmishes between the fugitives scraping for blue points, even if the burning sun these days is already making everybody sweat abundantly.

The climb towards Monte Bondone is more interesting (20 km for 1,373 meters of elevation change with sections at 9.0 %), where skirmishes become stabs, legs start turning and gears change furiously, looking for the right rhythm.  Ahead the gang of 6 hangs on while behind them Nibali moves the team, with Ciccone putting Dumoulin out of the game: is it definitive?

The Bondone mountain, covered in flowers, looks like the immense back of a whale just emerging from Lake Garda. Somebody is maybe getting distracted with thoughts of picking flowers, perhaps it’s the heat of these days or just the descent with the specialists who curve perfectly and somebody in the back forced to warm their brakes. The fact is that the group is losing its pieces leaving 4 in front: Visconti, Masnada, Kangert and especially Cataldo who is partly running for himself and partly worrying the group as a possible outlier for another sprint of Betancur.

However, it’s in this formation, fired up even if unraveled, that the four go beyond Passo Durone in one breath and face the last climb: 12 km with an elevation of 700 meters to Madonna di Campiglio. And here, under an unexpected Mediterranean sun and  western wind, only Visconti and Kangert manage to relaunch their attack, with the Italian who, at the 9th km, on the sole 9% tract, accelerates again and takes off. Looking at how concentrated he is one would think that he’s using his head more than his legs, he seems in a hypnosis rather than apnea while the people of the Giro don’t really know what to think: many were waiting for the big names, some for the “usual” Colombians, others for some young and enterprising riders. But today there’s Giovanni, appearing on the final overlook and arriving alone, without much greeting or fanfare.

Meanwhile, in the group of the best, Trek Segafredo continues to force things, unraveling the group. Carapaz appears stiff and tired, Dumoulin is getting in line.

Among the surprises of the last days, Betancur does not capitalize on the work done by Cataldo and loses terrain. Bilbao’s ride is still effective, he loses something but holds his ground. No longer surprising, just fascinating, are the legs of Evenepoel and Mäder, who nonetheless gain a little bit.

We know that these Alpine stages are often really two stages in one. The big names, old and new, who tested themselves and their mutual reactions, when Visconti left, probably remembered that tomorrow they have to climb the 2758 meters of the Stelvio, where the mechanics  would do well to be ready with oxygen tanks along with the spare wheels.

So even in this stage, clamped in a hot and dry climate that lets us feel climate change first-hand, “cool stuff”; from Giovanni, who went from the fridge of the Galibier to the oven of these scorching days; cool stuff from the eager young helpers who jump on the pedals like acrobats, cool stuff both from the old and the young bigwigs, who look at each other crookedly and continue to compete for the command of the ship. Cool stuff dedicated to the passengers of this pink ship, crowded and ecstatic along the safety barriers, to all those who still exist and to the pirates who are no longer among us.

Meanwhile Giovanni, of the Visconti from Turin, who grew up in Palermo with a Sicilian father and Neapolitan mother, now at 37 years old is the king of Trentino. After the solitary break of the 19th of May towards the Galibier, finished under a thick snow caressing the monument to Pantani, perhaps he made it all the way up here singing Bob Weir: “Climb the ridge like they were stairs, The wind all in her hair.. Living free from your past (and ours)”.