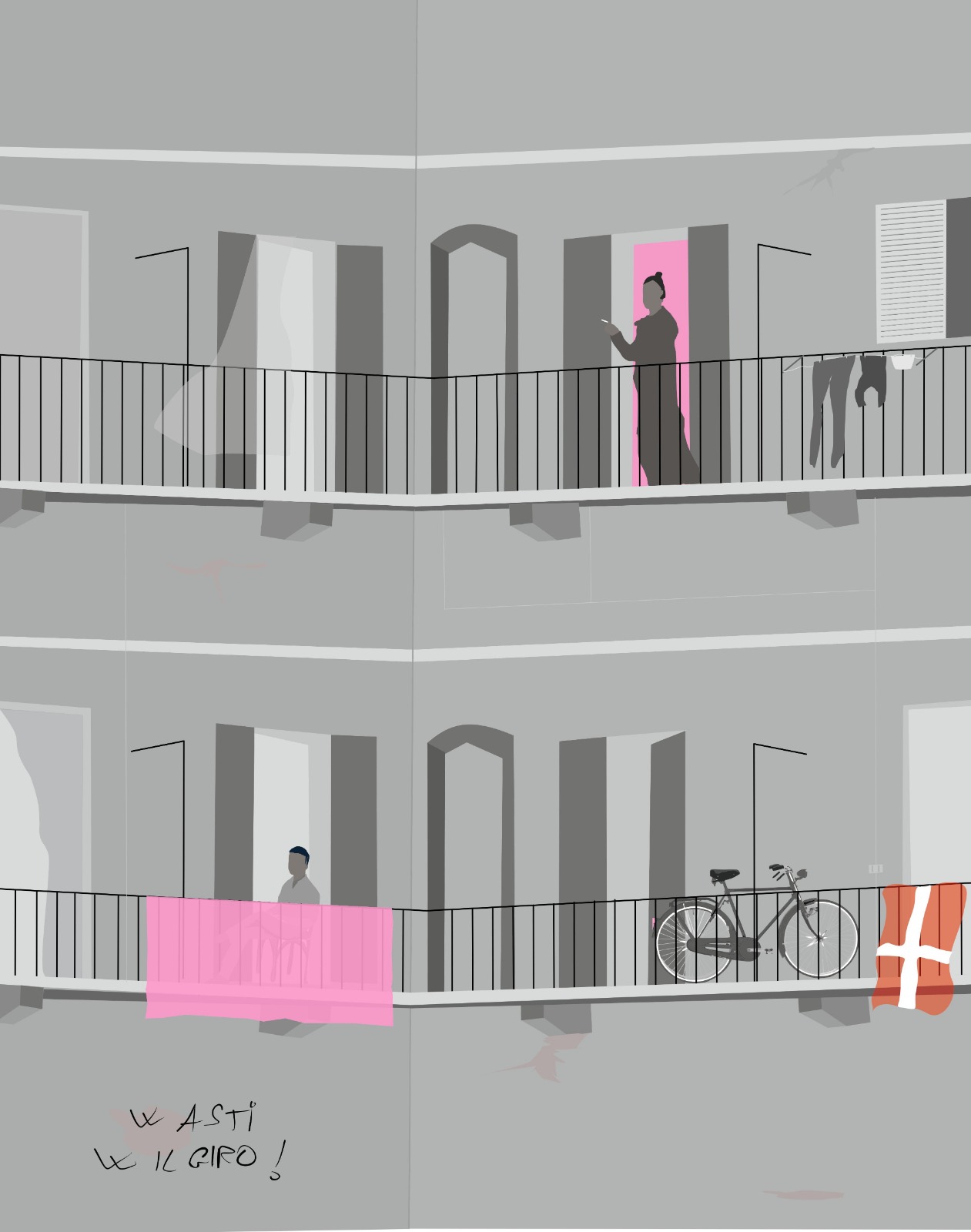 On the final sprint stage, a victory for the reborn Sagan

Asti, May 29, 2020
from our correspondent Lorenzo Franzetti
artwork by Daniele Margara

«Chial’è chel diàu?». Who’s that bombing down the home straight in Asti? It’s like watching Gerbi, the old Red Devil himself, at full-tilt amidst a procession. Why it’s Peter Sagan, heart, soul and everything else besides for a stage victory at long, long last. Let’s begin, therefore, with the heart: “I dedicate this to Wouter Weylandt, who’s always in our hearts, and to Iljo Keisse. His dream was to dedicate a stage win to his friend Wouter, but once again he hasn’t quite managed it.”

At 350 metres from the line, the Belgium Keisse is clinging on. He and a group of warriors embarked on a break 170 kilometres back, and he’s the last man standing. The Cofidis train is full gas for Viviani, and Sagan senses that the game’s up for Keisse. Hitherto he’d been sat on the wheel of his team mate Daniel Oss, seemingly disinterested in the imminent sprint. Instead, not unlike a falcon, he catches the others unawares as he launches from distance. He catches them by the others, swoops by poor Keisse, and the others sprinters have has no time to react. Viviani can’t reach him, and has to settle for second place.

Keisse on his promise to Wouter: «Yes, I wanted a win to dedicate to him, and in the peloton some of them knew about it». Only a question of the heart, as distinct to great physical condition, could make a 38-year-old attempt such a thing. Notwithstanding the fact that he’s almost certainly riding his final Giro, he’d attacked from the outset with all the fury of a youngster. Keisse is an old trackie nearing the finish, and he feels the need to ride a lap of honour worthy of his career. He doesn’t quite win, but the Belgian of Deceuninck deserved his standing ovation in this, his final Giro sprint. Today was a temporary truce for the maglia rosa aspirants, but tomorrow they will take up the cudgels once more.

The longest stage of the Giro, two days before its conclusion, is a day of pain for everyone. After the battle on the Stelvio nobody is immune. Those intent on imposing crazy rhythms on the bunch risk vituperation – not to say a thick ear – from the others. Even in a peloton with no apparent sheriff there is discussion, persuasion and agreement: The 251 interminable, flat kilometres between Morbegno and Asti need represent a breather, a mouthful of oxygen in advance of the final sprint.

Following two hours of calm which suit pretty much everyone there is space, finally, for the attackers. On the uphill and down dale of the Comasco, five of them slip away. It goes without saying that five isn’t enough to see off the sprinters, but it’s just enough, while they still have the puff in them, to create an impresa. The first to wrestle the initiative is the veteran Keisse. During this Giro he’s tried in every which way to realise a dream; for himself, for his long career, for an old friend who’s no longer with us. He’d taken it upon himself to explain to Evenpoel, his young captain, who Weylandt was, to articulate the tragedy of his loss when he hit that wall in Liguria in 2011. Back then, little Remco was still football-obsessed, fresh from a trial with PSV Eindhoven. Wouter and Iljo, on the other hand, had been lifelong friends. Lives passed almost in their entirety on bikes, from the days of hope back in Gent to the greatest, most important races in the world.

Everyone, team mates and adversaries alike, knows what Keisse has in mind. As such they cut him some slack, give him a fighting chance. Between the beginning and the conclusion of the dream lie the flatlands, and that means that for once they can enjoy the feed without having to wolf it down. They can throw their bidons to the fans on the roadside, and observe the pecking herons in the rice fields of the Lomellina. The inclusion of this final flat expanse seems entirely deliberate; a place to think and rethink. To think about the sweethearts they’ll be seeing again in three days’ time, and to contemplate the three weeks of toil they’ve undertaken. It’s a moment for listening to their bodies, and to speculate on how much energy remains. To win, to lose or simply to make it back to Milan…

Nicola Bagioli e Francesco Gavazzi, two of Keisse’s fellow escape artsists, are valtellinesi. The latter, in point of fact, is of Morbegno itself, and was rapturously applauded at the start. They’re joined by Bergamo’s Filippo Zaccanti, the guitar-playing rider who spends his evenings playing the songs of the great protest singer Rino Gaetano. Completing the quintet is another of the Giro’s hardcore. It’s Chad Haga and he, in an incident whose dynamic wasn’t so very dissimilar to Weylandt’s, lived to tell the tale. Haga sports a tattoo which states, “Eternity gained, only life remains”, and somehow it seems entirely apposite when one thinks of rider number 108, taken from us in 2011.

A five minute lead then, rising to almost six. Enough to revel in the applause of happy children, the crowds of the Po Valley, workers on their breaks. Then employees pressed against window panes, farmers grafting in the fields around Saronno, Abbiategrasso, Vigevano, Valenza and Alessandria. Enough for that, but to dull the instincts of the sprinters closing in for one last chance of a stage win.

Before Asti, the city of the “Red Devil” Giovanni Gerbi, hope springs eternal as the five eke out what remains of their energy amongst the pin-cushion hills of the Alto Monferrato: The hamlets Masio and Rocchetta Tanaro offer the scent of resistance, and of course of Barbera. Giants oaks, and very few bends. Too few – the gruppo consumes the attackers, with the exception of Keisse. He gives it one last heave, but the sprint is upon him…

Of course, the inexorable Sagan extinguishes his challenge. He takes the win, but leaves the poetry to whom, on this of all days, it’s due. A stage which may have seemed dull, but which was filled with stories and with humility.

«Devil Peter, forget the road
Come here with us, let’s drink an orangeade,
counterlight all the time fades away»

And so, time once again for the maglia rosa show. In the distant horizon, the final mountains await…