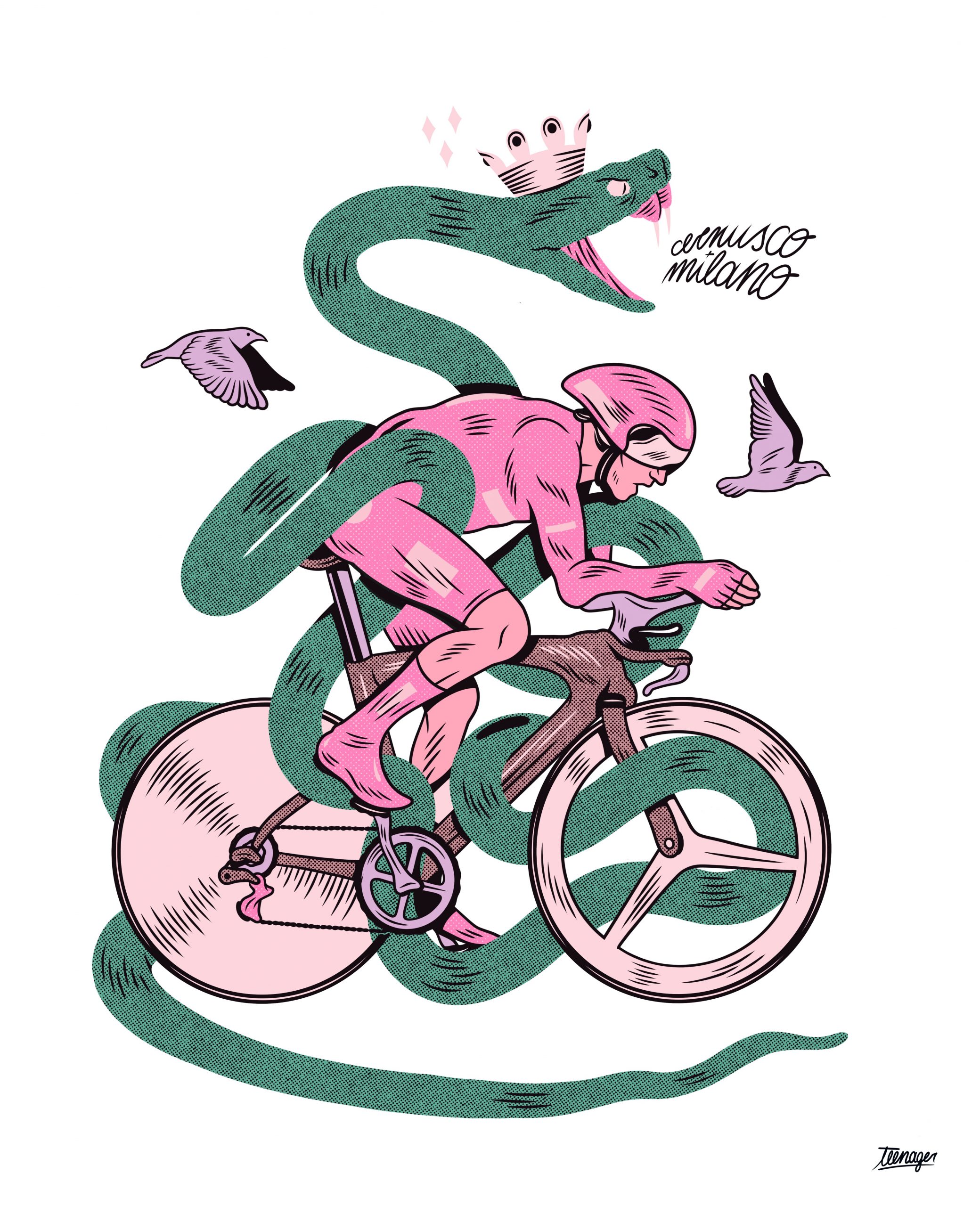 Just like Wenders’ film scene in which Emit Flesti – time in person if you read it backwards – slows the clock so that fate is fulfilled.

There is a pink balloon flying. But nobody knows why.

It is 4:53 pm on a late-May Sunday that will go down in history.

It all started much earlier, though: 90 minutes, like the title of a song by the Italian rapper Salmo.

Exactly the one that hammers the ears of Filippo ‘Top’ Ganna through earphones while he warms up on the rollers.

Filippo worked hard yesterday: the current individual pursuit world champion serving as domestique for his team leader Carapaz. This is how it has always been. If you are a powerful locomotive, you pull the train for as long as you can. Without complaining. Being grateful because life has allowed you to really do what you dreamed of as a child.

Filippo is calm while everyone is making complex equations to understand who will win or lose this Giro that – up to 36 hours ago – seemed already finished. He made his own calculations. Because a Time Trial is always a mathematical fact, but even more today.

Because there can be no margin of error in a flat stage of only 16 kilometres and a breath. It goes from Cernusco sul Naviglio to Milan. Where the Giro was born, in 1909, and where it returns today again. The finish line is in Piazza del Duomo: a spectacular scenery for a global audience. But many would have liked to see the peloton finish the race at the Vigorelli Velodrome, returned to life after so many years of oblivion. It will happen in the future. Maybe. Let’s hope it.

Ganna – who knows about velodromes – does not think about this, as he descends the ramp and begins to break the inertia of the 58 that he has decided to use: a gamble, after yesterday’s efforts and with an uncertain sky looking as maybe it is going to rain. But it is a conscious risk. Whatever happens, tonight he will go straight home, to Vignone, without thinking any more about the Giro, that is beautiful even if it can hurt.

Victor Campenaerts, Hour Record holder, has already been sitting on the throne of the best performance of the day for a while. He turned into power all the anger accumulated in three weeks tormented by punctures and mechanical failures. He stopped the clock just before 18 minutes of race. Unmatchable, many people think. But maybe not. Because Filippo reaches the intermediate timing point, along via Rizzoli, with a gap of only 2 seconds. And, like a young wild boar that has decided to charge, he continues to churn that infernal 58 gear. It will be about 470 average watts, estimated live. Such a power output when it is the last day of school.

‘Top’ Ganna rides like the wind, like a pedal Maverick that wants to subvert the rules of the game.

When he speeds through Largo Augusto, he is already the virtual leader of the time trial.

No one knows what they say to Filippo via radio, from the team car that is following him. But he does not care, because in his mind he still has the song by Salmo: «Frate’, non è che non sento. È che proprio non capisco un ca**o di quel che m’hai detto» (Brother, it’s not that I don’t hear. It’s just that I really don’t understand a sh*t of what you told me).

And so, Ganna crosses the finish line in Piazza del Duomo after 17 minutes and 43 seconds. He digs a furrow and starts waiting with the face of a child who made it big. Nobody will beat him: first stage victory at the Giro d’Italia. Applause. 90 minutes of applause.

Since then, it is like looking at a long procession of lonely and extremely fast men on bicycles. A countdown made of colours and sweats, up to the moment of truth: that of Nibali, Yates and Carapaz. The three riders leading the General Classification, separated by only 13 seconds. Everything and nothing, depending on how you look at them and recount them: the description of a moment.

Vincenzo starts. Strong. He churns his 56 gear like it was a time machine. The plan is to erase the memory of yesterday’s crisis and return to the Budapest feeling, to claim back his legs. And he is already at the gates of Vimodrone when Simon Yates goes down the ramp and starts pedalling. The great game of parallel clocks begins, because every second counts from now on. And you must check them. Three minutes later, Carapaz takes off, dressed in pink. And the game is full-on. And it gets complicated.

It would take a satellite now to frame them in the short period in which they are flying together, spaced along the Padana Superiore road. Because it looks like they are tied by an invisible rope, which does not allow any kind of gap. A plan-séquence from outer space. Three shining stars lined up in the immense darkness of the cycling cosmos. And then down, through the atmosphere, precipitously down to the detail of the pedals. It would take a piece of Mathieu Kassovitz’s filming talent before it all ends.

Vincenzo knows he is clearly the more skilled, theoretically. But they are on the road after 3500 kilometres and more. And he also knows that a crisis like yesterday’s one can be overcome, but you cannot fully recover in only one night. You do not invent anything in a time trial, that is “the race of truth” as Gianni Mura would have written.

When they pass the intermediate timing point of via Rizzoli, the clock is merciless: Carapaz is starting to struggle, but Yates is gaining seconds.

They go on, riding with the time – not against – hoping that it will be gentler with them than with the rivals. Effort and determination and speed and despair. Give all of yourself and go to the end. Nibali swoops into Piazza del Duomo, crosses the finish line and collapses: empty. A minute less than Ganna. Particularly good time. But it may not be enough. The sponsor’s digital clock shows 4:53 pm and, while Vincenzo is panting to recover, the unofficial reports say that Carapaz is raising the white flag.

In that very moment, Yates is speeding through Porta Venezia.

There is a pink balloon flying across the road and toward the sky. It feels poetic. Everyone looks at it. Then, suddenly, in the middle the street there is also the little girl who lost it. She pops out from the crowd, evading the controls, and starts chasing the balloon with her arm out in the air. It looks like an animated version of Banksy. A dramatic version. Because if you know cycling, its dynamics, and trajectories, you know this is going to end very badly.

But this is the moment in which everything slows down and Emit Flesti – time in person – decides the fate of the Giro.

While churning his 56 as if there was no tomorrow, clouded by the effort, Yates understands the situation. He remembers his youth as a great pistard. Evaluates. Reflects. Calculates. All in a split second that feels like a life. And it is worth it.

Then Simon moves violently to the right, as if he wants to climb up the bank of a track to reach the balustrade, and he finds the strength to accelerate again. And again.

He sprints between the little girl and the barriers as a holy flash. A liberating breath restores the crowd’s right to celebrate.

Simon Yates flies towards the pink jersey and his first Giro d’Italia.

The smallest gap in the history of the race.

The pink balloon flies high in the sky above Milan. Towards Bergamo.

There is always hope.