Milan and the bicycle. Milan and the Giro d’Italia. Milan and the Italian Touring Club. Three branches of an intimate partnership that is more than a century old. The time trial route embraces Milan from Cernusco sul Naviglio in the east all the way to Brianza. While cyclists pass by, without looking at the places of the great metropolitan globalization – industrial hangars, residential areas, shopping centres, junctions, ring roads and office complexes, including on Via Rizzoli the one that houses the new headquarters of the great mother of the Giro, the Gazzetta dello Sport; while they pass through the toll booths of the ancient Porta Orientale and Porta Venezia, which still bear traces of the Milan of Roman, medieval and Spanish times and leads to the urban lounge of the centre; while they point to the heart of the Duomo, tracing the curve of the inner ring road to the Corso di Porta Vittoria and San Babila, the history of Milan past flows by as if in a dream. Milan on two wheels.

Late 19th century; the bicycle is the toy of the Milanese bourgeoisie. The first velocipede clubs appear, including the Veloce Club Milano in 1870 – whose members include the baron-cyclists Giuseppe and Fausto Bagatti Valsecchi, Federico Johnson and Luigi Vittorio Bertarelli, founders in 1894 of the TCCI or Italian Cycling Touring Club – and the first races are launched: the tour of the Ramparts (January 1871), the Milan-Turin (1876), the first race outside the city to exceed 100 km. The “Gazzetta dello Sport” was born in 1896 from the merger of two cycling weeklies. But the bicycle soon became unpopular among the ruling class, as demonstrated in 1898 by the decree issued by General Bava Beccaris which forbade its use after Milanese workers’ protests against the high cost of living. It then became a symbol of freedom and resistance – for women too – in the ferocious years of the world wars.

The first Giro d’Italia, organized by the Gazzetta dello Sport, started from the Lombardy capital in 1909, then for over a century the little Madonna continued to baptize – with a few exceptions and interruptions (the two world wars) – the arrival of cyclists in the Duomo square after three canonical weeks of racing. She also blesses them today, at the finish line of the first Senzagiro in history, irreverently moved to one of the sanctuaries of 20th century cycling, the Vigorelli Velodrome. She will bless them again tomorrow because everything flows under the Milan sky, even a Giro Senzagiro, everything is recreated and transformed in the city/construction site, capital of the velocipede and capital of bike sharing today. Soon the sweat of cyclists will return to stain the asphalt once again.

Dedicated to the memory of Antonio Maspes, a great Milanese track cyclist, the Velodrome was built in 1935 on the site of ​​the old Milanese exhibition centre, between Piazzale Carlo Magno, via Arona and Giovanni da Procida. On this extremely smooth track, made from strips of fir from the Urals, great champions competed to beat the hour record: Fausto Coppi’s attempt was legendary, in a Milan threatened by aerial bombing, on 7 November 1942. On many occasions, it was the finish line of the Giro d’Italia, and of classics such as the Giro di Lombardia. It was also the scene of musical events that have gone down in history: on 24 June 1965, the first and only Beatles concert in Italy was held there. On 5 July 1971, the first and last Led Zeppelin concert took place on an unfortunate evening that ended in violent urban clashes. Then the decline, abandonment, deterioration until the redevelopment began in 2015 as part of the Citylife urban project. Over the past number of years, the Vigorelli Velodrome Committee has periodically opened its doors to those who want to experience the thrill of cycling on its “magic track”. 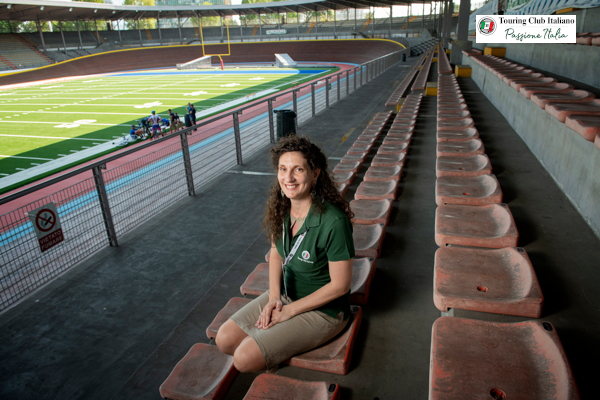